A impressive DIY speaker array for the ambitious. 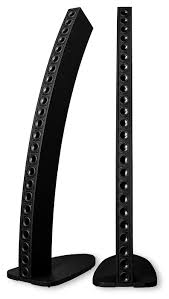 What stands 5 feet high and has 24 audio drivers?   The Dayton Audio Epique CBT24 is a unique speaker design which is available as a kit. It was designed by Don Keele Jr. who has worked for Electro-Voice, JBL, Klipsch, Crown, and Harman International over the last 40 years.   His Constant Beamwidth Transducer is based on U.S. Navy underwater sound research.   The array provides astonishing imaging and accuracy, with an extremely flat and consistent on- and off- axis response, and vastly reduces floor, ceiling and wall reflections, while providing superior dynamic range.

The kit is easy to assemble and the unfinished MDF cabinets can be finished in your choice of colours.   An inexpensive Digital Signal Processor is recommended to equalize the frequency response and it can also be used with a sub-woofer.   Kit price is $2420. That may seem like a lot, but if the performance puts it in the esoteric category it is a bargain.   Daniel Kumin of Sound and Vision magazine did a very informative review last year which is well worth reading through if you are even the slightest bit interested in such a novel design.

I assembled the CBT24 kit after the xmas break. As I had previously prepared the cabinets and undercoated them I was keen to get them working as soon as possible. But it would be quite difficult to try and paint around the drivers once they are in place so I taped up the front edges and spray painted the baffles with satin black first. I also did the bases. Once the towers are bolted into the bases it's a relatively straightforward task to feed the wiring harness into each one, insert the acoustic damping pieces and then attach the wiring to the driver terminals. Then fix the drivers with 192 screws. The last step is to attach the wiring to the terminal blocks and screw them also.
I took the assembled arrays and hooked them up to my main stereo system which has an Icon Audio Stereo 60 amplifier. The instructions indicate that some equalisation is necessary to extend the frequency range of the arrays, but my amp doesn't have tone controls so that wasn't possible. Nevertheless I was able to get an idea of the sound without them. Several things were immediately apparent. Firstly they sound like large panel speakers (eg Quad electrostatics or Magneplanars). Secondly the mid-range is absolutely superb. Voices and solo instruments are wonderful. ​They have limited bass in the unequalized mode. 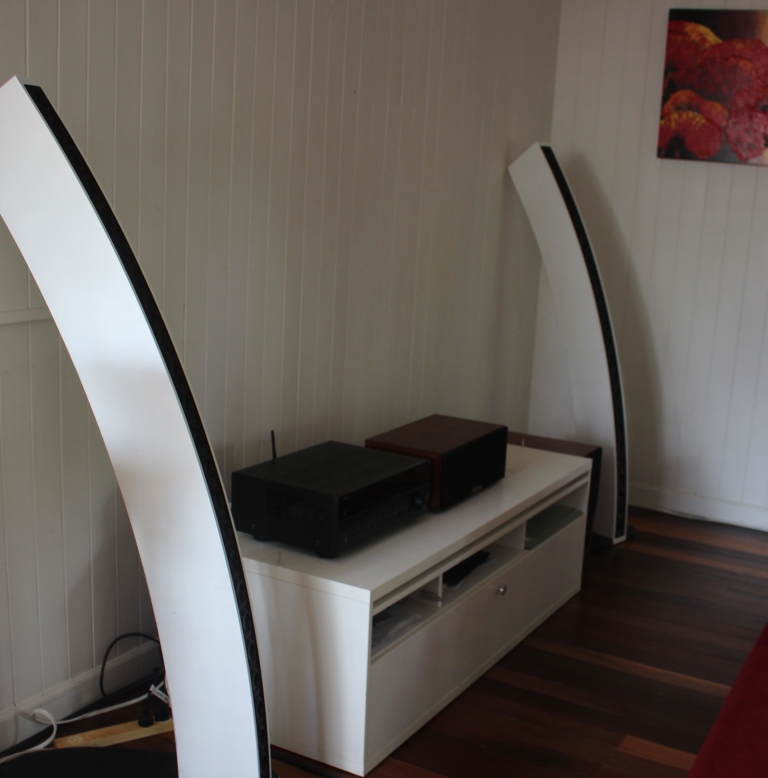 Next I moved them into the home theatre room and replaced the left and right front speakers. The HT receiver has automatic room and speaker equalization so I ran that before starting to listen. Once again the outstanding feature is the mid-range. We have often observed the vocalists on some recordings are a bit recessed, not so here. The overall sound is fuller than with the normal front speakers - most impressive. And on movies there is also a distinct improvement.
The final test is to move them back to the stereo system and use a Digital Signal Processor to apply the recommended equalization curve.

28/2/19   For two months we have been enjoying the CBT24 arrays in the home theatre room both with movies and using a superb Icon Audio CDX2 CD player rediscovering many CDs that hadn't been played for a long time. But I was still keen to hear them with my demo stereo system.   It took a while to find time to learn how to use the miniDSP 2x4 HD. This inexpensive digital signal processor is very versatile. It enables two input channels to be routed to any of four outputs and a variety of filters, notches, and equalization curves, to be applied. This means it can be used for crossing over to sub-woofers, bi-amping, or in this case simply applying an equalization curve to each of the CBT24 arrays as recommended. This involves a shallow notch filter at 7KHz and some boosting at 8.5Khz and 15.5KHz, plus a general lift below 100Hz, but rolled off steeply at 40Hz. The miniDSP is connected into the Tape monitoring circuit of the Icon Audio Stereo 60 amplifier, using just output channels one and two. It is possible to add one or two subwoofers via outputs 3 and 4 but I didn't do that and found it was unnecessary.   I have already reported that the sound was fine without equalization, but the gentle equalization took things to a different level. The mid-range, as ever, was superb but now there was a fullness due to the augmented bass response and a bit more treble sparkle and airyness. I played a variety of CDs, SACDs, and LPs and was rewarded with the best sound I have ever heard from my stereo system.   Once again, the outstanding feature is the wall of sound produced (without the visual domination of large panels) with mid-range (eg vocals and solo instruments) being superb. Another characteristic previously noted is the well defined stereo image across a wide listening area (no sweet spot). I have listened to great number of loudspeakers over the last 10 years and have to say these are amongst the nicest, and when you consider the modest pricing are definitely the best value. The fact that you can purchase them as a kit and save $900 is an added incentive for someone adventurous.   We have added the miniDSP 2x4 and miniDSP 2x4 HD to the webstore. I admit that learning to use these does involve some intense study and programming, but the ability to compensate for speaker and room frequency irregularities is impressive, and that's why these techniques are included in most home theatre receivers on the market.