Our office is closed this week, reopening on Monday July 26th.

It was in 1992 that Acoustic Sounds owner Chad Kassem reissued his first Analogue Productions title, Virgil Thompson's The Plow That Broke The Plains, originally on Vanguard. Analogue Productions began as a vehicle for Kassem to license his favorite all-time recordings and reissue them as remastered and as a superior version to the original release. Since its inception AP has reissued hundreds of titles, ranging from classical to folk, pop, rock, blues and jazz. Included in the many highlights of Analogue Productions' history are the Fantasy 45 Jazz Reissues, the Blue Note Reissues, and premium box sets of the music of such legendary acts as The Doors, Stevie Ray Vaughan, Creedence Clearwater Revival, Nat "King" Cole and Norah Jones. True to its name, Analogue Productions works with the original analog master tapes - more than any other reissue label! The result is superior sound - richer, warmer and more lifelike, than digital. 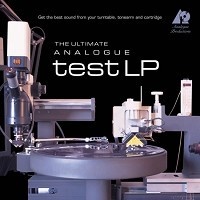