Similarly the neoSAS/R enjoys all the benefits listed above with one crucial advantage:
The four facets of its crystalline ruby cantilever taper toward the diamond tip. This tapered ruby cantilever design allows for lower moving mass, giving the neoSAS/R even greater ability reproduce vibrations in the record groove with precision, accuracy, speed, and fidelity.

Facets of the tapered ruby cantilever can be seen in the images above and below. Cuts made to the cantilever reduce the moving mass of the diamond stylus tip.

Contact Surface Area as a Function of Stylus Tip Profile

The chart below depicts several types of stylus profiles viewed head on and in cross section. Also seen are the measurements of their tip radii and the surface area in contact with the record groove wall. Profile radii (R) are measured in microns (µ). Surface area in square microns (µ2) is calculated using measurements L1 and L2.

Variations in the size and shape of the stylus tip affect the amount of surface area which can be applied to the groove wall. By optimizing its curvature and reducing the minor radius, the S.A.S. tip maximizes the contact surface area by a factor of 1.25 in comparison to other line contact styli.

Points of Contact with the Record Groove During Reproduction

As the record rotates the orientation of the groove wall changes relative to its point of contact with the stylus. At the microscopic level the undulations of the groove present various angles to the diamond tip. Because the S.A.S. tip mimics the shape of a cutting stylus, it sits more comfortably in the groove. The better the stylus fits the record groove, the less distortion occurs at high amplitude reproduction.

*In the interest of product improvement, changes may be made to specifications without prior notice. 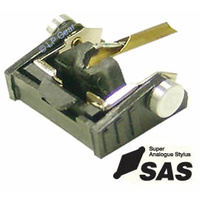