Designed in Leicester by David Shaw, founder of Icon Audio. 845s the ultimate power triode!  The RCA 845 valve dates from about 1931 when the only way to get higher powers was to make valves bigger and run at higher voltages. The later EL34 and KT88 types are far more efficient but do not sound the same.

When first released in the UK the MB845s were greeted with great acclaim by the hi fi press and customers, for power and value, but above all their unique sound quality. They have become THE reference valve amplifier for Hi Fi World magazine.

Many other 845 amplifiers use 4 stages, often using 300B valves, this more complicated design does not give the speed and clarity of the MB845s, or give the maximum output of 115w useful if your speakers need a lot of power. But the power is secondary to the large bandwidth and low distortion available.

For some people only a large triode valve like the 845 can give the golden warm tone which is so pleasing, with its feeling of air and space and sense of realism. The MB845 MK I has truly become a legend in the UK, but hi fi fans were soon asking if there was more that could be done to improve the performance. With the MB845 Super, Icon Audio have used all their expertise to create the ultimate amplifier.

Surprisingly from such big amplifiers is how well they perform at low powers. Their agility and detailed texture of strings and vocals is quite astounding. Modern recordings demand low noise amplifiers. The MB845s will give you an “ink black silence”

A special feature of the  MB845s is the high and low sensitivity. This enables MB845s to work with both “Passive” and conventional pre amplifiers. This is not done by attenuation which reduces quality, but genuinely changes the gain of the input.

•  All hand wired point to point

•  No printed circuit board to ‘colour’ sound

•  Class A, all Triode front end

•  Can be used with passive or active pre-amp

(Allow space for connections and ventilation) 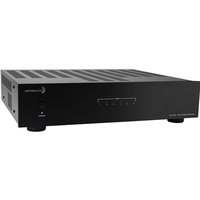