Current arms are now in the MK 3version - these have a much higher performance due to their dual pivot bearings and MK2 arm tube which consists of a superior alloy to the MK1. The latest tubes are identified by their satin chrome finish as opposed to the black tubes in the MK1 version.

I suspect the Mk III Illustrious is now the value-for-money sweet spot in the lineup, and if not the world's best, it is certainly world class. As noted, it will not appeal to the audiophiliac who is compelled to endlessly fiddle and adjust everything. Rather, it is an elegantand addictivesolution to extracting music from vinyl. Combining the sonic virtues of both unipivot and gimbaled bearings in a fuss-free package, it should work exceedingly well with a wide variety of cartridges and turntables. It is certainly the best all-around tonearm I've ever had in my own system. Highly recommended! Bruce Kinch Positive Feedback magazine

The latest review from Positive Feedback magazine on the dual pivot illustrious MK3 tonearm has just been posted on the web. This is a great read for anyone considering a tonearm purchase.

The Origin Live Illustrious represents an incredibly advanced tonearm design. Developed and built around a cost-no-object philosophy, the Illustrious utilises many of the features of the successful Origin Live Encounter tonearms whilst also improving in a number of key areas.

Current arms are now in the MK 3version - these have a much higher performance due to their dual pivot bearings and MK2 arm tube which consists of a superior alloy to the MK1. The latest tubes are identified by their satin chrome finish as opposed to the black tubes in the MK1 version - older arms can be upgraded to MK3 specification for £299 - the improvement is worth far more than this in terms of performance.

"The best tonearm I've heard to date ....brilliantly detailed yet utterly musical, this arm is set to join the ranks of the all time greats. Wholeheartedly recommended!"
David Price - Hi-Fi World 2003

"The apparent width of the perceived image was enormous, as the image was so large that my living room walls seemed to melt away. This was complemented with a precision of spatial characteristics that made listening to the Illustrious an absolute pleasure... moreover the extra dynamic range over all the other arms here was simply stunning....Along with firecracker dynamics, something SME users will know, it possessed a seamless rhythmic ease and flow which SME V users will not! This is a beautifully fluid listen, yet gives nothing away in terms of grip and focus...bringing almost all the fluidity of the best unipivot with vastly improved grip and incision - the best of both worlds, if you like.

and the winner is... the Origin Live Illustrious, a pick up arm that is quite simply breathtaking. It's ability to display a three dimensional stereo image is above critisism, as is it's transparency and lack of artifice. It also has amazing tonal accuracy, which lets the "flavour" of each instrument or voice flood out of the speakers. This is the respect in which it is most obviously superior to the SME.... on any deck ... this is surely the best.
Albert Lee - Hi-Fi World 2004 Group comparison test of 7 tonearms

Won Stereo Times "most wanted component of the year Award 2004" in combination with the Resolution Turntable.

Some commentators estimate that up to 70% of front end performance can be attributed to the tonearm - The illustrious arm more than lives up to its name in representing the near summit of replay equipment. This arm will release the full performance available from your vinyl collection.

The Origin Live Illustrious represents an incredibly advanced tonearm design. Developed and built around a cost-no-object philosophy, the Illustrious utilises many of the features of the successful Origin Live Encounter tonearms whilst also improving in a number of key areas listed below:

1) A more advanced Yoke manufactured from a superior material which is also much heavier and more difficult to machine.

2) The yoke also incorporates additional decoupling for the bearings. The extra decoupling involves internal devices that are not visible from the outside but which involve complex and high precision machining operations

3) An advanced headshell with added strengthening in the form of side webs/ flanges to prevent microscopic twisting under the torsion loads exerted by the cartridge - these webs also minimize bending. Headshells are often overlooked but are very important to maintain a stable platform for the cartridge - To get an accurate portrayal of micro-vibration on a tonearm it is helpfull to picture a minature man with a sledge hammer banging the stylus in all directions - this produces shock waves that ripple throughout the tonearm structure. Holographic images of headshells taken during record playing have revealed that most headshells flex and twist significantly. To prevent this we have added the side webs which means that the whole headshell has to be machined from a solid block of high strength alloy - the headshell is both lighter than the standard headshell and also stronger by virtue of the side webs

6) The Lift lower handle is specialy made for aesthetics

7) The armtube and headshell are black anodised

Great care has been taken in the design of the Illustrious armtube. There are literally thousands of possible materials that an armtube could be manufactured from. Because this choice alone has such a huge influence on the performance of an arm, Origin Live have conducted a great deal of research and testing,resulting in the use of a highly specified alloy with the correct sonic characteristics.

To achieve high strength / low resonance, the armtube is also specially profiled and machined from a solid aerospace alloy billet. The arm has a large diameter to provide massive torsional strength which manifests itself in superbly controlled deep bass together with increased focus, stability and resolution throughout the whole frequency range. The tight, powerful and yet completely natural bass produced by this arm is revolutionary. This alone adds so much to the musical experience since bass quality carries the hallmark of authority.

Extensive design and development has also taken place in the construction of the illustriouss bearing housing and arm base. Built from a variety of materials selected for performance reasons only, this revolutionary high strength, low resonance base magnifies the performance capabilities of the armtube dramatically.
The Illustrious bearing housing has also been specially designed to offer high mass in the horizontal plane for cartridge stability whilst maintaining low mass in the vertical plane to maintain excellent tracking ability. This housing, coupled with highly specified bearings, results in a tonearm that improves on the already amazing level of tonal and sound-staging of the Encounter arm. The Illustrious arm also provides an even greater live feel to the music, with fabulous transient speed, air and no lag or overhang yet always maintaining accurate decay of notes. 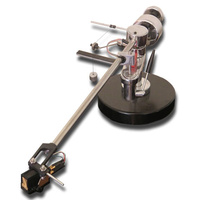 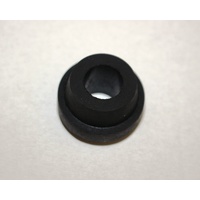 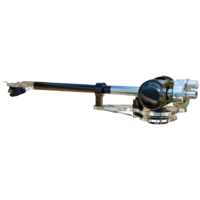