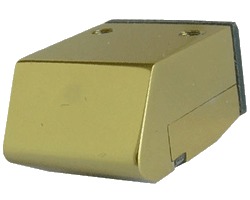 How and why is this cartridge different from, and possibly superior to all the others? Is it a "moving coil" or a "moving magnet" design? Neither! Only a lighter, thinner, shorter, magnetically active metal foil bearing the stylus comprises the entire moving system. This results in lower moving mass than either moving coil or moving magnet models.

The London Decca cartridges may be the only ones which have no cantilever, at least in the conventional sense. This appears to be the underpinning of their stunning success. It has been said that the London Deccas "reek of musicality."

Other cartridges (both moving coil and moving magnet) have styli mounted on the long end of a thin tube (cantilever) which works like a lopsided "see-saw." The short end of the cantilever attaches to either a coil of wire or a magnet. At the fulcrum point, a flexible "rubbery" sleeve functions as a pivot, allowing the stylus/cantilever assembly to respond to the "wiggles" in the LP groove. Because the front section of the cantilever, which holds the stylus, is much longer than the rear section that is attached to the coil or magnet, a large movement of the stylus is transformed to a smaller movement at the coil or magnet, possibly causing cantilever-design cartridges to sound dynamically compressed and lacking in transient attack. London Decca's engineers advise that this problem with dynamics and transients is compounded by the cantilever's "rubbery" fulcrum point which tends to absorb a significant amount of the stylus-generated motion before it can reach the coil/magnet electrical generator assembly. Also, a smearing of the sound is said to occur, which many folks refer to as "cantilever haze."

The Jubilee has no long cantilever and no "rubbery" fulcrum point to absorb, dissipate and smear the vital musical energy. Instead, the stylus is attached directly to a magnetically active metal support just a few microns thick (armature) which passes through the center of the main generating coil positioned only about 1 millimeter above the stylus! The stylus motion is not inverted or "transformed" to a smaller value, as in long cantilever designs. Flowing from this immediate positive-direct scanning of the groove is a breathtaking, lifelike quality. The listener tends to feel that the performing artists are actually in the same room, with a startling, palpable presence.

From the beginning, music lovers have lauded the unparalleled vividness of the London Deccas which were first introduced over 25 years ago. However, earlier models were criticized, at times, for such reasons as their unusually high vertical tracking force, a tendency to mistrack, and the need for special (damped) tone arms. The new London Decca Jubilee has retained and enhanced the legendary musical realism of its predecessors, but also achieves world-class tracking ability at only 1.8 grams (VTF). A damped tone arm is not necessarily required, and unlike most high quality moving-coil designs, the electrical output level of the London Decca Jubilee is among the highest, 5mV, needing no pre-preamp or step-up transformer.

"...unrivalled dynamics...the best phono cartridge I've tried. The dynamic expression was revelatory, even state-of-the-art...spine-tingling excitement...textbook reading of pace, rhythym and timing...sets an example to all."

"Amazing! Incredible! Fantastic! These were the words that sprang to mind when auditioning the London Jubilee...the sheer detail and vividness of the Jubilee bowled me over...brings music to life like no other." 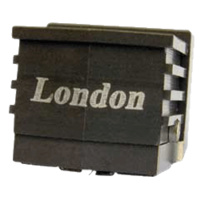 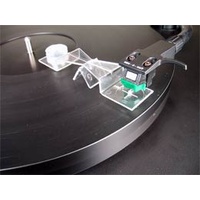 Regular use will keep your diamond stylus clean